Max Quest: Amazon is yet another innovative and exciting game by Betsoft that is designed to reward players, but also keep them entertained for many hours. This concept is set to revolutionize the gambling industry and bring a whole new meaning to the term online gaming as it has many unique features. They are extremely eye-catching and so far, players around the world have had positive feedback on this game.

How does Max Quest: Amazon work?

First off, Max Quest: Amazon is not your traditional casino game. Instead of pressing buttons and wagering on various numbers, you take full control of your profit. The main objective of the game is to fire bullets at the enemies. The more enemies you hit, the higher your reward will be.

The way you do that is, you are provided with a weapon. The more damage you do with your weapon, the higher your rewards will be. This game has multiple types of enemies and their Hit Points will vary. But, you also have numerous weapons to choose from.

Each weapon has certain advantages and disadvantages and they are suitable in certain situations. The fired bullets will lower the target’s HP. After their HP goes down to zero, they are defeated and the player is presented with an award. Enemies randomly drop 1 out of 3 rewards: cash, special weapons, or treasures.

You use the cursor to point at the enemies and use the left-click to fire your weapon. You can also lock on the targets with a right-click to ensure that your shots will hit a specific target.

Max Quest: Amazon has several rooms and they are allocated based on the cost-per-bullet, or wager value. After you select your suitable wager, you are automatically transferred to the first available room. Each room has a max capacity of 6 players. 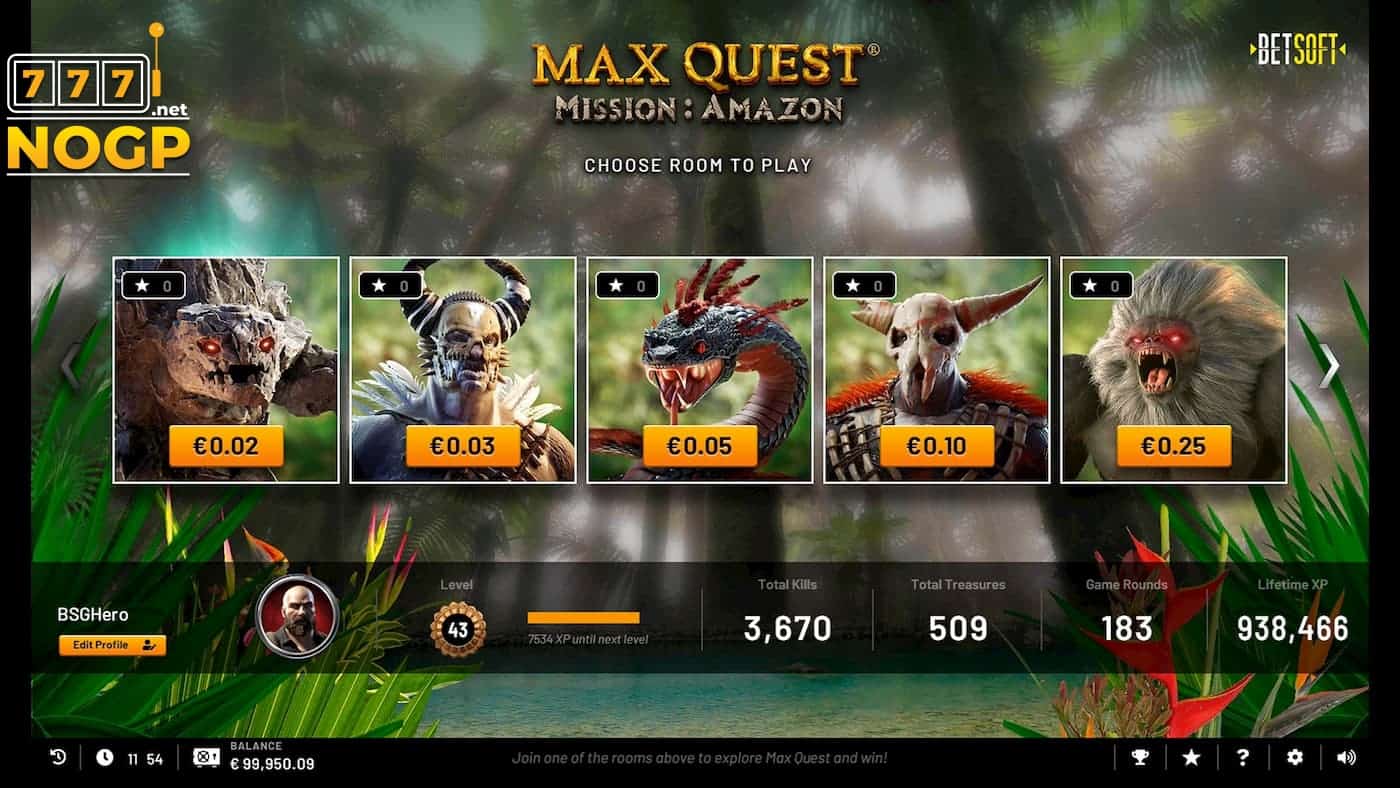 There are two types of weapons in the game – standard and special. Players start with a standard pistol that fires basic bullets. Special weapons are dropped by enemies when they are killed. Logically, they do more damage, so they are best used against strong enemies or groups of enemies. Apart from getting them in-game, special weapons can also be purchased.

Some of the featured weapons in Max Quest: Amazon are: pistol, shotgun, machine gun, mine launcher, laser, flamethrower, cryogun, and artillery strike.

As we stated earlier, to win prizes, you need to engage the enemies in the game. You are rewarded as you deduct their HP. But, Max Quest: Amazon features several types of enemies and they all have different Hit Points. Some are easy to kill, while some are more difficult.

Enemies have levels 1-3 and their HP rises with their level. Each bullet does certain damage and after the target’s HP reaches 0, it will drop a random prize.

Apart from the standard enemies that we just mentioned, Max Quest: Amazon also features legendary bosses. There is a small chance that they will be spawned with each enemy killed. There are 3 legendary bosses in the game: Spider Queen (1,000 HP), Stone Guardian (2,500 HP), and Primal King (5,000 HP).

They periodically drop cash rewards and after they are defeated they reward the player with a large prize, including a rare gem. Rare gems have instant payouts and your chances to get them are higher if you use special weapons. Diamond, Ruby, Emerald, and Sapphire are the featured rare gems. 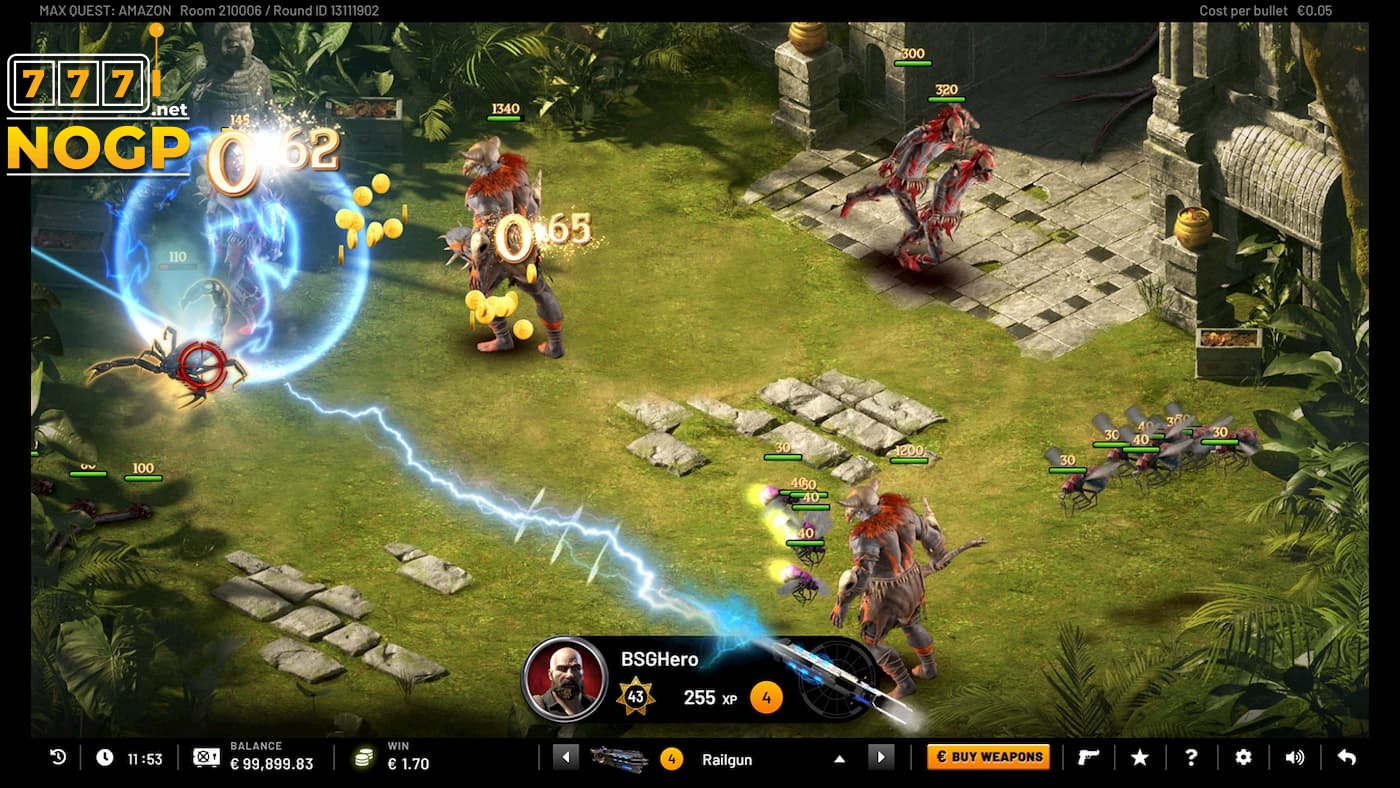 Alcyone’s Sorrow, The Loyalty of Sirius, Cassiopeia’s Vision, Solar Glory, and Betelgeuse’s Passion are the featured treasures in Max Quest: Amazon. Gathering them will award players with various cash prizes based on their bets.

All in all, Max Quest: Amazon is an extremely entertaining game which is set to revolutionize the way we look at online gambling. This concept represents a change in the gaming type as it combines the best features from standard offline games and casino games.

The system of rewards is also unique, which is why many players are fond of it. The game is fully optimized for mobile and desktop use and can be accessed at any time and place, which is also good. We can conclude that Betsoft has outdone themselves with Max Quest: Amazon.

Betsoft’s Max Quest series can be played exclusively at a number of accredited online casinos at the time of writing. The game can be played at Bob Casino, Playamo Casino, Woo Casino and Spinia Casino. Below you will find a top 10 with Betsoft Casinos, but you cannot always play the Max Quest games here.