Due to lack of time, it has been a while since I reviewed a Yggdrasil slot. That is why I thought it was high time to test another game from this game developer. Today I am taking you through my experience with Yggdrasil’s Valley of the Gods 2 slot that will be playable from September 24, 2020. This is a sequel to the Valley of Gods slot released in 2017. The game developer calls the game a “slice of heaven on earth,” and I wonder if that’s true. You too? Then read on quickly.

How does the Valley of the Gods 2 slot work?

You can spin on Valley of the Gods 2 from £/$/€0.10 to £/$/€100 per spin. The game is played on six reels in 2-3-4-5-6-7 format. This is quite a unique playing field that maximizes your potential. A winning combination is available from three matching symbols from left to right on adjacent reels.

Incidentally, the entire playing field is not played continuously. Namely, 16 positions are locked, giving 240 ways to win. A winning combination releases beetles (Scarabs). These beetles can destroy the blocks that lock the positions. This allows you to play with a maximum of 20160 ways to win. When all blocks have been destroyed, the Free spins feature is also activated. I will explain this further below.

The player also receives a respin after each winning combination. Valley of the Gods 2 has a RTP of 96% and can give up to 5481 your stake. 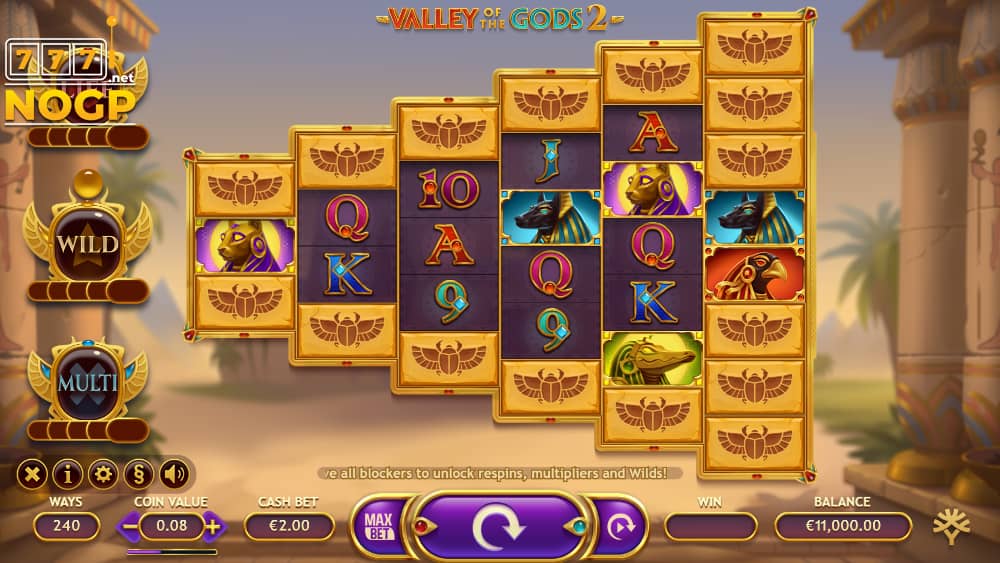 A screenshot of the Valley of the Gods slot. Here you can see that 16 positions are locked.

Once all 16 blocks have been destroyed, Valley of the Gods 2 Free spins feature is activated. Here the beetles will turn to red, blue and yellow. The beetles are collected and can give lives, multipliers and wilds. The feature is played on the entire playing field with 20160 ways to win.

Symbols and symbol value of the Valley of the Gods 2 slot.

Valley of the Gods 2 has no scatter symbol. The game does have a wild symbol and there are ten regular symbols, six of which are low symbols, represented by A, K, Q, J, 10 and 9. The other four are the Egyptian gods Anubis, Horus, Sobek & Bastet. The values can be viewed in the table below.

My Valley of the Gods 2 video slot review.

Valley of the Gods 2 is definitely recommended for anyone who is done with a “standard” video slot and wants to play “out-of-the-box”. The Yggdrasil team has created a creative video slot with a playing field that grows with the success of the player. The more you win, the bigger the playing field and the number of ways to win.

The potential of 5481x your bet per spin is not bad either. The only thing I don’t like is the low RTP percentage. This is 96%. It seems that in general the RTP percentages of the slots are getting lower. I see more and more slots with an RTP below 96%. This is at the expense of the players. Besides that, Valley of the Gods 2 is a beautiful game that remains exciting. I give a NOGP Rating of 4.2 out of 5 stars.

How much can I win?

What devices can I play the game on?

The game is optimized for all smartphones, tablets and of course computers. Valley of the Gods 2 can therefore be played on almost any device.

How much can I bet?

If you want to play Valley of the Gods 2, you can do so at our accredited Yggdrasil Casinos. So below I have placed NOGP’s top 10 best rated online casinos where you can play the games of Yggdrasil. You can also choose one of my favorite casinos. For example, give Casino Lab, Betsson, Simple Casino, Cookie Casino, Crazy Fox, Boom Casino or No Account Casino a try.