Who is Disco Danny? On the main image, he slightly resembles Elvis, due to his attire. Though subsequently, he has a John Travolta smirk thing going on. Shades of Saturday Night Fever. However, the reality is that he’s just a generic character to complete the 70s disco theme NetEnt is aiming for with this release. In any case, come the 9th of August, 2020, Danny will set ablaze online casinos everywhere, with his funky disco style, in this, sadly, unoriginal game.

How does the Disco Danny slot work?

The bonus feature hit frequency is 1 in 250 spins. Though, you may have to wait much longer than that. It requires patience for the opportunity for some big bonuses to roll on in, and the game has only two bonus features, which I will explain below. 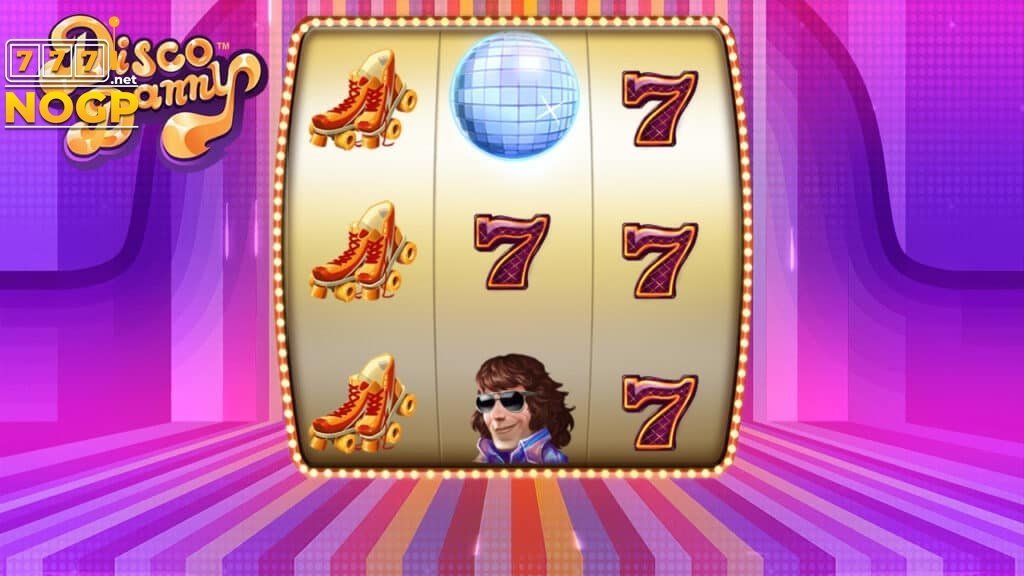 If a Golden Disco Ball lands anywhere on the reels, it will award the player a random cash prize. Well, it’s not exactly random, as it’s listed to be between 10x and 20x a player’s bet.

There are 5 different levels in the Free Spins feature with an increasing multiplier, from 1x to 10x. If golden balls fill the reels, their values are added and multiplied by the level multiplier, and the player moves up a level. This feature makes big wins possible.

Symbols and symbol value of the Disco Danny video slot.

The low-paying symbols in the game are single, double, and triple BARs. They pay 0.6x for any combination of the three, while for combinations consisting of their kind, they payout 1x, 2x, and 3x a player’s bet. The medium-paying symbols are the sevens and some roller skates. They provide wins 4x and 6x a player’s bet. Danny is the main symbol in two different attires. Blue and White. These can provide wins 100x a player’s bet. There is no Wild Symbol in the game, and the Golden and Silver Disco Balls are the game’s Scatters.

We briefly touched upon the unoriginality of this game in our intro. We mentioned it because the game is a blatant clone of NetEnt’s Super Striker. It uses the same math model and features. The design is different, but it’s more-or-less the same slot. That’s not necessarily a bad thing. If you’re into a little disco funk, this game can be your jam. The win potential is rather enticing and the game’s vibe is uplifting and positive. As such, Disco Danny receives a NOGP Rating of 3.5 out of 5 stars.

What’s the RTP of the game?

Can I play Disco Danny for free?

Yes. The game is available for free play at our accredited NetEnt Casinos.

Is there a Free Spins bonus round?

Yes. There is a five-level Disco Danny Free Spins mode with an increasing multiplier.

If you want to play Disco Danny you can do this at all NetEnt Casinos. Below I have placed a top 10 with online casinos where you can play the game. The top 10 is based on NOGP’s CasinoRank. Give PWR.bet, Mr Favorit, Cookie Casino, Play Luck Casino or Avalon78 Casino a try. Or make your own choice in the list below.