Quickspin’s Vampire Senpai slot will be available from July 14, 2020 and is based on Chinese legend Jiangshi. This is a zombie-like vampire that is so stiff that it can only hop around with outstretched arms. Anything that stands in the way of Jiangshi will be killed to absorb its own life force. However, Quickspin has given Jiangshi her own creativity so that the Vampire Senpai slot is not so frightening. In this article, I will tell you all about the features and mechanics of the game and give my rating.

How does the Vampire Senpai slot work?

Quickspin’s Vampire Senpai slot game is played on a 5×5 playing grid. Whether the game has paylines or works with clusters is unfortunately not yet known. The game can be played on any device from £/$/€0.10 to £/$/€100 per spin and has an RTP of 96.5%. In the base game there is a Mystery feature that will change 3 to 5 symbols in Talisman Wilds. Talisman Wilds count for every symbol that can create a winning combination. There is also a Vampire Wild symbol. When one or more Vampire Wilds land, a Jiangshi will hop across the playing field and put his teeth into a medium symbol, after which this symbol will also change into a Wild symbol. There is also a free spins feature that I will explain further below. 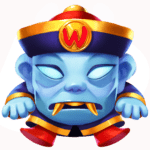 The Free Spins feature of Quickspin’s Vampire Senpai slot can be activated by landing 3, 4 or 5 bonus symbols. This gives 7, 8 or 9 free spins respectively. As soon as a Vampire Wild symbol lands, it will remain in play for the remaining free spins and will jump to a different position each spin. Every Talisman Wild that lands will be locked for the remaining free spins. Each Vampire Wild or Talisman Wild that lands during the feature also gives one extra free spin.

Symbols and symbol value of the Vampire Senpai slot.

The Vampire Senpai slot has in addition to the Talisman Wild, Vampire Wild and Bonus symbol, the game also has seven regular payment symbols, three high ‘human’ symbols and four low card symbols: A, K, Q, and J. The values can be seen below.

What I am especially happy about is that this game is once based not on Greek or Egyptian mythology but on a Chinese folklore: Jiangshi. Once a unique theme. The features are also well thought out and completely fit into the theme. There is also almost 9000 times the stake to be won. As always with Quickspin, I also have nothing to criticize on the graphics. I give Vampire Senpai a NOGP Rating of 3.7 out of 5 stars.

Where can I play the Vampire Senpai slot?

The game can be played at all Quickspin Casinos. We do recommend that you only play at online casinos that are accredited by NOGP. For example, try Sons of Slots Casino, Joo Casino, Nitro Casino, Cookie Casino, Boom Casino, Casumo Casino or Justspin Casino.

What can I win at Vampire Senpai?

When can I start playing Vampire Senpai?

The game will be released July 14, 2020 and will be playable at all our accredited Quickspin Casinos from then on.

Below I have posted NOGP’s top 10 accredited Quickspin Casinos. At these casinos you can play Vampire Senpai for free and for real money.