Thunderkick’s sequel to the Pink Elephants slot released in 2017 will be available from April 30, 2020. In addition to improved graphics, Pink Elephants 2 is much the same. Also some adjustments have been made in the features. In this article, I would like to take you to the Far East in search of the magical pink elephants and share my thoughts on this Thunderkick slot. No, you are not on a magic mushroom trip.

How does the Pink Elephants 2 video slot work?

Pink Elephants 2 is played on six reels, four rows and has 4,096 ways to win. If you want to spot pink elephants, this can be done on any device from £/$/€0.10 to £/$/€100 per spin with an RTP of 96.13%. A winning combination consists of three identical symbols from left to right on adjacent consecutive reels. With every spin in the base game there is a chance that the Mystery Scatter symbol feature will be activated. When this happens, 1 to 5 Scatter symbols are added to the reels, increasing the chance that the Bonus game feature – which I will explain below – is activated.

A screenshot of the Pink Elephants 2 slot

During the free spins, Elephants Orbs may appear. These are collected and fill a meter on the right side of the playing field. As soon as a meter is full, the corresponding goat symbol will transform to the next higher symbol in the payment table. Once all four goat symbols have been transformed, they will change to a pink elephant symbol. This is the highest symbol in the payment table. Every time a meter is full, this will also give 1 extra free spin. 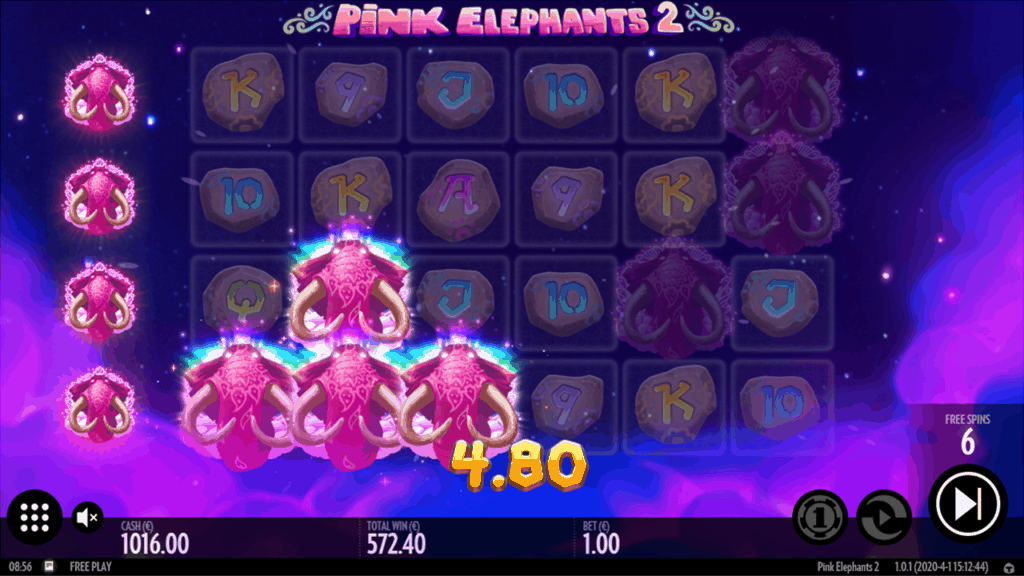 A screenshot where the bonus game is activated.

Symbols and symbol value of the Pink Elephant 2 slot.

Pink Elephants 2 has a Wild symbol. This symbol applies to any symbol that can form a winning combination. In addition to the Scatter and Wild symbol, the game has 11 regular symbols, one of which is a high symbol represented by a pink elephant. The four medium symbols are represented by four goats: a pink, yellow, green and blue. The low symbols are rune stones depicting an A, K, Q, J, 10 and 9. The values can be viewed below.

Where can I play Pink Elephants 2?

If you want to play Pink Elephants 2 you can do so at our accredited Thunderkick Casinos. Our recommendations to play the game are Casumo Casino, Swift Casino, Joo Casino, Nitro Casino, Casoola Casino, N1 Casino, Bob Casino or Playamo Casino.

What is the maximum I can win?

Can I play Pink Elephants 2 for free?

Yes, Pink Elephants 2 is free to play at all of our accredited Thunderkick Casinos. At some casinos it is necessary to open an account before you can play for free.