Red Tiger Casino is releasing a video slot on April 23, 2020 with a mythological theme based on the Greek God Zeus. Zeus lived on Mount Olympus and controlled nature from there. This God could also throw lightning and he is also known for that. The lightning god is a well-known theme in the iGaming Industry. For example, Play’n GO released the Gods of Olympus and Rise of Olympus slot and we reviewed the Ancient Fortunes: Zeus slot machine from Microgaming in 2019. With the quality games of Red Tiger in mind and the fantasy around Zeus, we are very curious about the Zeus Lightning Power Reels slot.

How does the Zeus Lightning Power Reels slot work?

Red Tiger’s Zeus Lightning Power Reels video slot is played on a 7×6 grid with 30 paylines. The game is equipped with the Power Reels mechanism. This means that a winning combination does not necessarily have to be on the payline from left to right. Once there are three or more identical and adjacent symbols anywhere on a payline, there is a winning combination. The game can be played on any device from £/$/€0.10 to a maximum of £/$/€20 per spin and an RTP of 97.73%.

Zeus is the Wild symbol and is three symbols high. When the symbol lands and is fully visible, the Expanding Lightning feature is activated. Zeus will throw lightning at any symbol. This symbol will expand over any number of reels. When the Expanding Lightning feature is activated, it doesn’t matter if the symbols are adjacent, a winning combination is now from three non-adjacent symbols on a payline. There is also a free spins feature that we will explain below. 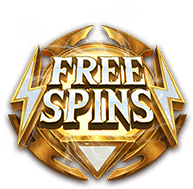 The Free spins feature of the Zeus Lightning Power Reels slot can be activated by landing three Scatter symbols. The player gets 8 free spins with which he can start playing immediately or “gamble” with that number on the Royal Wheel to attempt more free spins. The player can spin the “Royal Wheel” up to three times. On the first spin, the player can win up to 20 free spins, the second spin 30 and the last spin 40. Note that you can also win less, the lowest is 4 free spins.

Two additional Zeus Wild symbols are added to the game during the free spins feature. Therefore, multiple Zeus Wild symbols can land, so that multiple reels will be filled with the same “Expanding” symbol. It is also possible that the symbol is upgraded to a higher symbol. It sounds complicated, but it is not. Check out our video below.

A wonderful game. Even graphically and visually there is nothing to complain about. Good features. Finally a game in which the power of Zeus is well processed. It is also one of the slots with the highest Return to Player percentage. That is namely 97.73%. You won’t find them much higher. The only downside to the game is the betting range. You can only bet a maximum of € 20 per spin. This will be disappointing for the big players among us. Zeus Lightning Power Reels receives a NOGP Rating of 4.7 out of 5 stars.

Where can I play Zeus Lightning Power Reels?

What are "Power Reels"?

What is the payout percentage of the Zeus Lightning Power Reels slot?

The payout percentage of Zeus Lightning Power Reels is 97.73%. This makes the game one of the top slots with the highest Return to Player percentage.

If you want to play the game, we recommend that you do so at one of our accredited Red Tiger Casinos. At the casinos below you can play the Zeus Lighting Power Reels video slot.