Yggdrasil’s MultiFly slot takes the player to the African jungle. At first glance the game looks beautiful and we are very curious what the gameplay has to offer us. Yggdrasil says the game is definitely for you when you remember the Owl City song: ‘You would not believe your eyes, if ten million fireflies, lit up the world as I fell asleep’ Why? We will find out in this article. MultiFly! is based on the African rainforest full of psychedelic plants and creatures. MultiFly! can be played from March 24, 2020 at our accredited Yggdrasil casinos.

How does the MultiFly! video slot.

MultiFly! is a win-all-ways slot machine. With a playing field of five reels and three rows, this means that there are 243 ways to win. Like all Yggdrasil slots, this game can be played on any device, from a minimum of £/$/€0.10 to a maximum of £/$/€75 per spin and an RTP of 96.3%. MultiFly! is a Cascade slot machine. Winning symbols disappear from the playing field and new symbols replace them. That is not all, because as soon as this happens, a Wild symbol is also placed in the playing field by one of the lizards, which are at the top of the reels.

Also, the lizard multiplier that places the Wild symbol on the playing field will be increased by 1×. In winning combinations, the multipliers of the reels on which the combination is multiplied. This is shown in the MultiFly! slot machine also called the Dropdown feature. Finally, there is also a Free spins feature that we will explain below. A winning combination consists of three identical symbols from left to right on successive reels. 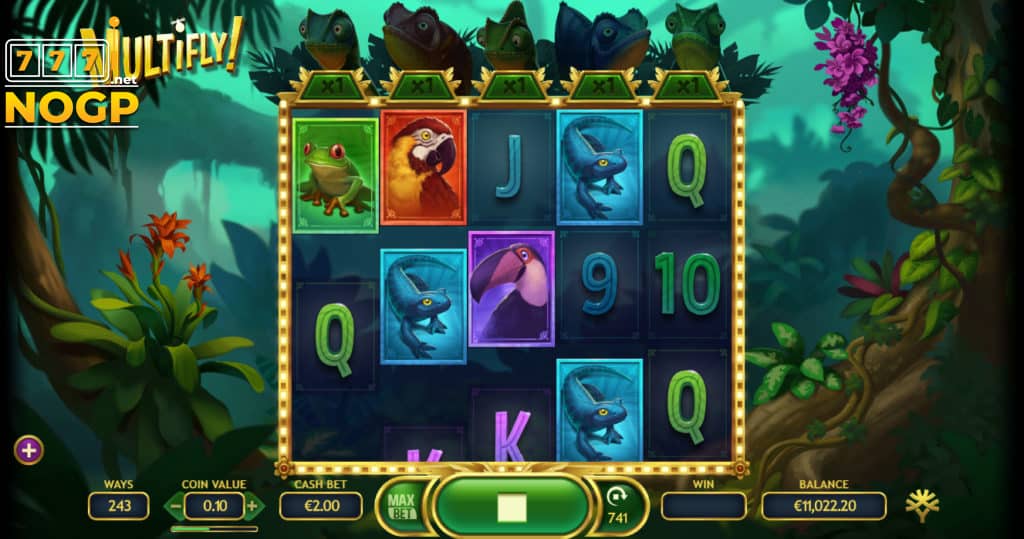 A screenshot of the basic game of Yggdrasil’s MultiFly! video slot. 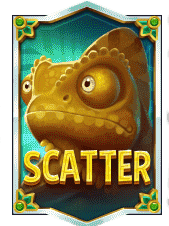 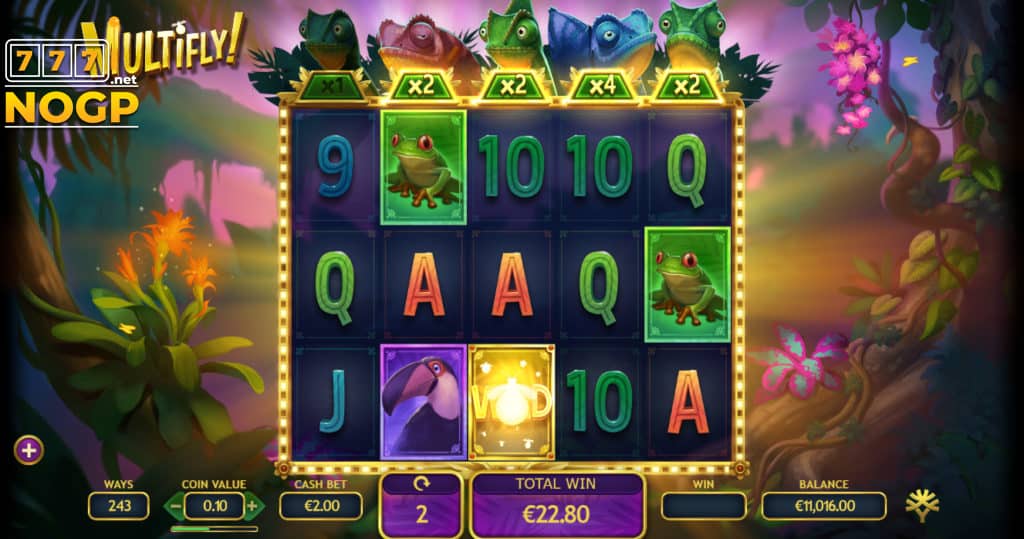 A screenshot where the free spins feature is activated.

Symbols and symbol value of the MultiFly! video slot.

The MultiFly! slot has ten regular payment symbols, four of which are premium symbols represented by tropical inhabitants of the African rainforest: a parrot, toucan, frog and salamander. The low symbols are represented by A, K, Q, J, 10 and 9. The values of the symbols can be seen below.

Yggdrasil’s MultiFly! is a simple game. Graphically, the game looks sublime. However, we do not really understand the connection between the song Fireflies from Owl City and the MultiFly slot. While playing the game we hardly saw a Firefly. The game is very easy to play. This Yggdrasil slot gets a NOGP Rating of 4.1 out of 5 stars.

Where can I play the MultiFly video slot?

If you want to play MultiFly you can go to one of our accredited Yggdrasil Casinos. You can play the game for free and for real money at licensed casinos like Crazy Fox Casino, Online Casino London, Swift Casino, Joo Casino or N1 Casino.

Can I play MultiFly! for free?

Yes, you can play MultiFly! for free. Please check our review to find our top 10 accredited Yggdrasil Casinos.

What is the maximum I can win?