Play’n GO is allowed to add a new video slot to its “rocks” series. Black Mamba, Demon and Sabaton already preceded the heavy metal band Annihilator. This is the band on which this Play’n GO slot is based. Are you ready to rock? Then drum your guitar and place a bet on the Annihilator slot. For those who don’t know the band: Annhilator is a Canadian trash metal band that is best known for the “Alice in Hell” album. The game can also be played from April 23, 2020 at all our accredited Play’n GO Casinos.

How does the Annihilator video slot work?

Annihilator is played on a five-reel, three-row, and 20-payline playing field. The game can also be played on any device from £/$/€0.10 to a maximum of £/$/€100 per spin with an RTP of 96.20% and can be lowered to 94.20% by online casinos with an MGA license. Casinos with a different license can go up to 84.20%. A winning combination consists of three identical symbols from left to right on a payline. There are also three features built in: In Command, Fun Palace and Set the World on Fire. I will further explain these features below. Good to know is that the Annihilator video slot has two Scatter symbols: the regular Scatter symbol and the bonus Scatter symbol. 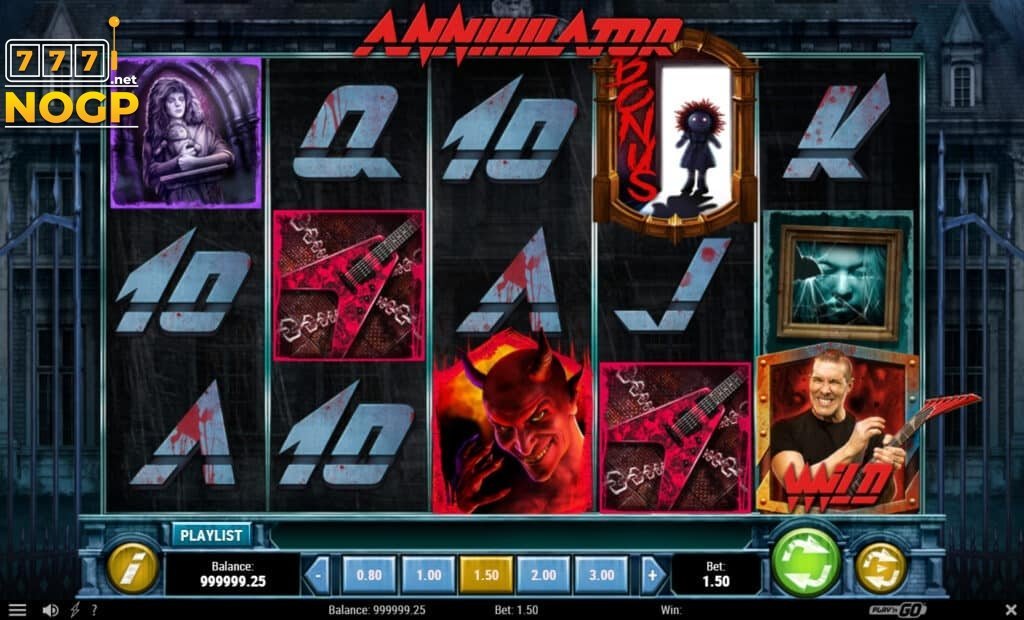 A screenshot of the basic game of the Annihilator slot 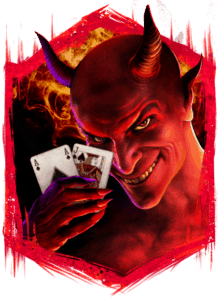 The In Command feature can be activated at any time in the base game. As a result, the Wild symbols that have landed will expand over the entire reel and you will get respins to a winning combination.

Annihilator’s Fun Palace feature is a pick and click game and can be activated by landing three bonus Scatters. Once this succeeds you will be transported to Fun Palace where you have to choose a Clare doll. Below is a random cash prize or you can activate the Set the World on Fire Free spins. 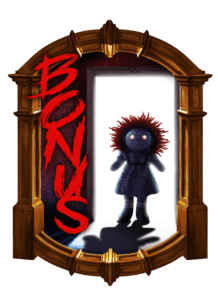 The Set the World on Fire is the free spins feature of the Annihilator slot machine and can be activated by landing three regular Scatter symbols or via the Fun Palace feature. You will receive 8 free spins with an opportunity to win additional free spins. When a Scatter symbol lands during the feature, you will receive 2 extra free spins. With every spin, the band’s lead singer, Jeff Waters, will move across the playing field, leaving a trail of fire. Then when a Wild symbol lands in the fire, the entire trail turns into Wilds.

Symbols and symbol value of the Annihilator slot.

In addition to the two Scatter symbols and the Wild symbols, Annihilator has eight regular symbols, five of which are low symbols represented by A, K, Q, J and 10. The high symbols are represented by Alice with her Clare doll and a broken mirror. The values of the symbols can be seen in the table below.

I personally am not a fan of heavy metal and my ears really needed a rest after playing this slot. Many players may not know the band, but Annihilator is popular in Canada. It is a pity that it can take a long time before a feature is activated, so that the course of the game gets boring rather quickly. Especially when you don’t like the music but there is a mute button for that. Annihilator has a maximum winning potential of 5000×  the bet. I give the game a NOGP Rating of 3.4 out of 5 stars.

Where can I play the Annihilator slot?

If you want to play the Annihilator slot you can do this at almost all our accredited Play'n GO Casinos. Our recommendations are top casinos like Crazy Fox, Avalon78 Casino, Nitro Casino, Casoola Casino, N1 Casino or Boom Casino.

How much can I win with Annihilator?

When can the game be played?

Below you will find our top 10 accredited Play’n GO Casinos. If you want to play Annihilator it is recommended to do so at one of the casinos below.