If you are looking for a unique casino game and are looking for a different type of video slot than usual, you can try Red Tiger’s Golden Cryptex slot from March 19, 2020. You can know a Cryptex from the book or movie the Da Vinci Code. The device was invented by the author of the book. In the book, the cryptex is a portable device that can be used to put in a secret message. Red Tiger based the Golden Cryptex slot on this device. The rotating brass rings are now used as reels on which the symbols land. In this article we are going to tell you all about Red Tiger’s Golden Cryptex slot.

How does the Golden Cryptex video slot work?

Golden Cryptex may have a different playing field than you are used to. The game is played on a playing field with 5 reels, 3 rows and only 3 paylines. This Red Tiger slot is all about cracking the secret code. If you land five Aces on the row with the golden hand (the middle row) during the base game, you have cracked the code that activates the Golden Spins feature. We will tell you more about this feature later in our review.

Golden Cryptex can be played on any device from £/$/€0.10 to a maximum of £/$/€60 per spin with an RTP of 95.78%. A winning combination consists of three identical symbols from left to right on a payline. 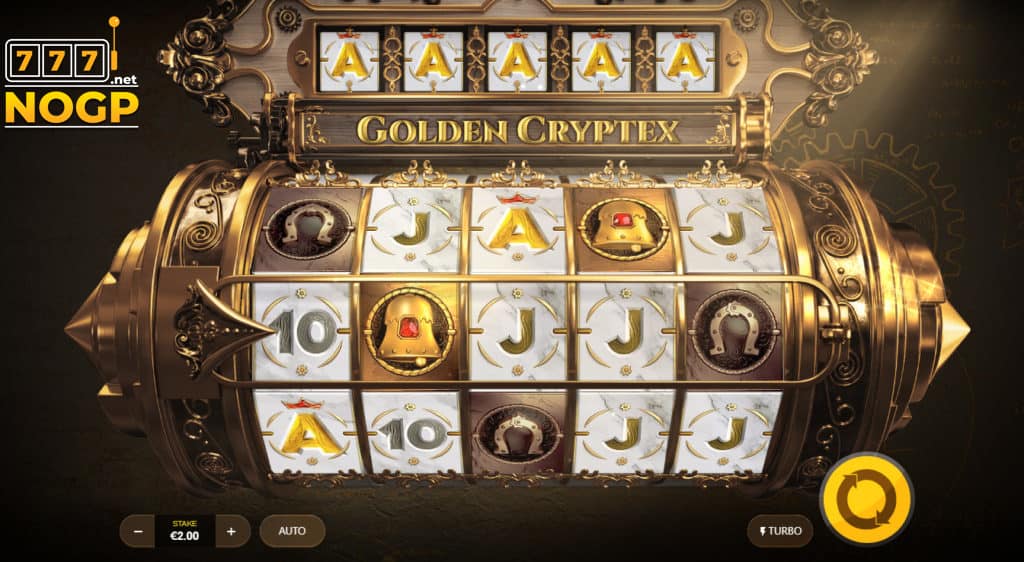 A screenshot where the Golden Spins feature is activated.

Symbols and symbol value of the Golden Cryptex slot.

Red Tiger’s Golden Cryptex video slot has nine regular symbols, four of which are high symbols represented by a Lucky 7, bells, stars and a horseshoe. The low symbols are represented by A, K, Q, J and 10. The values can be seen in the table below.

Although the features in Golden Cryptex are not very special, the game is beautifully put together and it is one of the most beautiful games we have ever seen (graphically). The game will immediately grab your attention because of the design, but unfortunately little happens to keep the attention. However, with the use of only 3 paylines there are many spins that are of no use to you. With Golden Cryptex, up to 1525 times the stake can be won. The game receives a NOGP Rating of 3.2 out of 5 stars.

If you want to play Golden Cryptex you can do this at our accredited Red Tiger Casinos. Our preference to play Red Tiger slots goes to casinos like Joo Casino, Nitro Casino, Casoola Casino, Gate777 Casino, N1 Casino, Boom Casino, Casumo Casino or LeoVegas Casino. If you prefer to gamble somewhere else, check out our top 10 online casinos below.