Red Tiger Gaming has announced its first video slot for 2020. Again an online slot with an Egyptian theme. This time not with Pharaohs rising from the dead or Egyptian Gods but a slot where the well-known scarabees are central. That is why the game is called Jewel Scarabs. Jewel Scarabs can be played from January 9, 2020 at our accredited Red Tiger Casinos.

How does the Jewel Scarabs video slot work?

The game can be played on any device from £/$/€0.10 to a maximum of £/$/€10 and has an RTP of 95.77%. Jewel Scarabs is played on a five-reel, three-row, and nine-payline playing field. A winning combination is from three identical symbols from left to right on a payline. It is a simple game and there are not too many features. The Scarabee symbol functions here as a Scatter and Wild symbol. The symbol also remains in play as long as it is part of a winning combination and will move to a different position every spin. There is also a Golden Spins feature, which we will explain below. 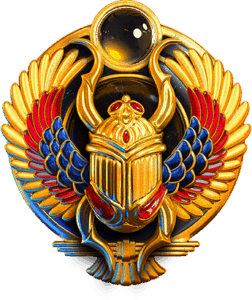 A screenshot with the Golden Spins feature activated

Symbols and symbol value of the Jewel Scarabs slot.

In addition to the Scarabee symbol, which functions as Wild and Scatter, the Jewel Scarabs video slot has nine regular symbols, four of which are high symbols represented by Anubis, cat goddess Bastet, falcon god Horus and the eye of Horus. The five low symbols are represented by the card symbols A, K, Q, J and 10. The values of the symbols can be seen below.

If something is fully milked out in the iGaming Industry, then they are online slots with an Egyptian theme. We have also seen the symbol that functions both as Wild and as Scatter. Where Red Tiger often distinguishes itself from the other software providers, they now seem to go along with the hype and we think that is a shame. We are no longer waiting for an Egyptian theme. That of course does not mean that it is not a fun game. At Jewel Scarabs you can win up to 5245 times your bet. We give the game 3.2 out of 5 stars.

If you want to play Jewel Scarabs, you can do so at our licensed and accredited Red Tiger Casinos. Below you can find our top 10 online casinos where you can play Red Tiger slots. Our preference goes to top casinos such as Spinamba Casino, Wixstars Casino, Kassu Casino, Simple Casino, Casino Gods, Campeonbet or Casumo Casino. If you prefer to play somewhere else, you can view our top 10 below.