Eye of Horus is an online video slot that was officially released by Merkur (RTG), a sister company of Blueprint Gaming. The game was very popular both online and in land-based casinos. However, the game, which is based on the Egyptian God Horus, is now outdated. This was reason enough for Blueprint to provide the game with the popular Megaways mechanism. The result? The Eye of Horus Megaways slot. From November 28, 2019, the game can be played at our accredited Blueprint Casinos.

How does the Eye of Horus Megaways video slot work?

Eye of Horus Megaways is played on five reels on which two to five symbols can land. This depends on the number of Megaways that are determined with each spin. The number of Megaways can amount to 15,625 here. The game can be played on any device from £/$/€0.10 to a maximum of £/$/€10 with an RTP of 95.49%. Just like the original, the Megaways version also has only one feature: the Free spins feature. Below we will explain the feature in more detail. Horus is the Wild symbol and applies to any other symbol except the Scatter symbol. This symbol will also spread over the entire role. The free spins feature is activated from 3 scatter symbols

The Free spins feature of the Eye of Horus Megaways slot machine is triggered by landing three or more Scatter symbols. The player starts with 12 free spins. If one, two, three or four Wild symbols land during the feature, the player will receive one, three, five or seven extra free spins respectively. 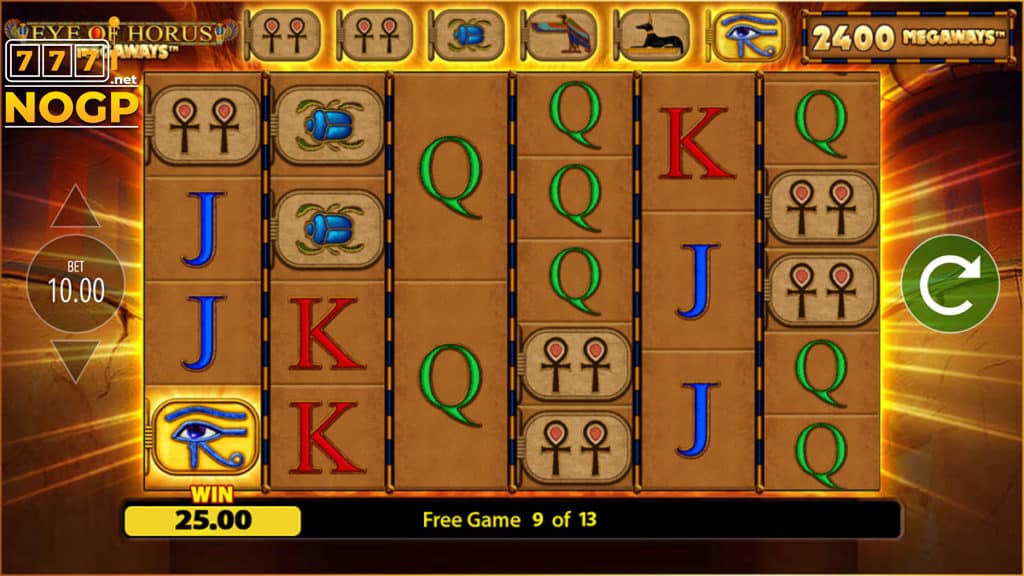 Symbols and symbol value of the Eye of Horus Megaways slot.

Eye of Horus Megaways video slot has the same symbols as the first variant. There are nine regular symbols, four of which are represented by the card symbols A, K, Q and J. The five high symbols are represented by stone engraved Ankh crosses, blue scarabees, a Horus falcon, Anubis and the Eye of Horus. The values of the symbols can be viewed below.

If you want to play Eye of Horus Megaways we recommend that you do so at licensed and accredited Blueprint Casinos. Below we have placed our top online casinos where you can play on Blueprint slots. We prefer casinos such as CasinoCasino, Wixstars Casino, Chilli Spins Casino, Yako Casino, Fun Casino, Casumo Casino, Simple Casino, All British Casino or SlottyVegas. If you prefer to play somewhere else, you can view the list below.