In Play’n GO’s Divine Showdown, various gods will compete against each other, including the Norse God Thor, the Chinese Monkey King Wukong, the Greek God Athena and the Egyptian God Anubis. A good basis for creating a beautiful video slot. Divine Showdown can be played from December 12, 2019 at our accredited Play’n GO Casinos which you can find at the bottom of this article.

How does the Divine Showdown video slot work?

The game is played on a playing field of five reels, three rows and 20 fixed paylines. A winning combination is from three identical symbols from left to right on a payline. Divine Showdown can be played on any device from £/$/€0.20 to £/$/€100 per spin and has an RTP of 96.51%. As always, operators can reduce the percentage of Play’n GO slots. In this case it can be reduced to 94.50%. There are of course various features and modifications. For example, there is a Multiplier Reel feature that can be activated at any time. At any time the four Gods can also activate their modifications and there is a Free spins feature where you can select one of the four Gods. We will explain the features below. 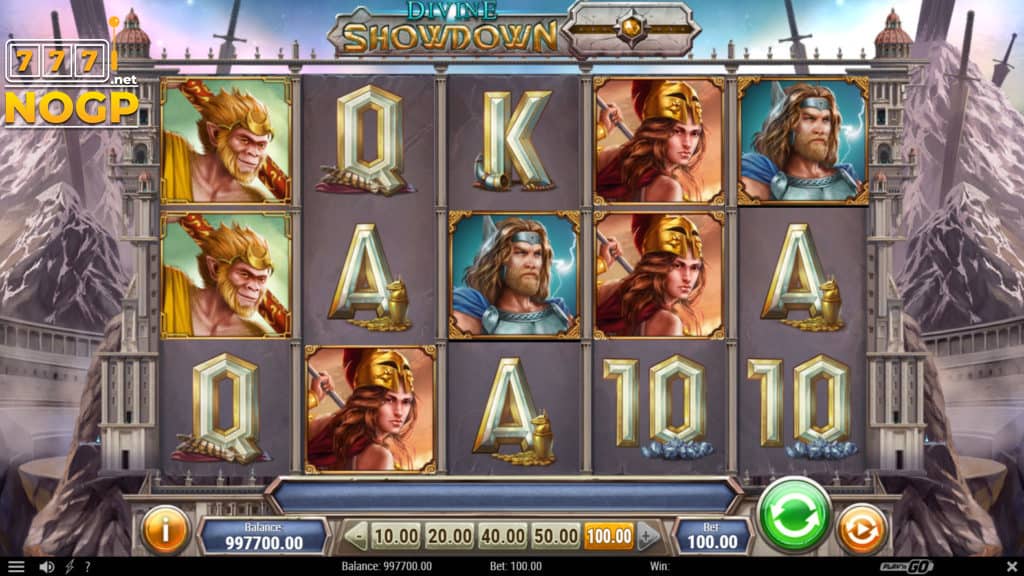 A screenshot of the basic game of Play’n GO’s Divine Fortune slot.

As previously written, the Multiplier Reel feature can be activated at any time. When this happens, the slot at the top of the playing field opens to reveal a multiplier of up to 10x.

One of the four Gods can appear to activate the corresponding modification. The player then receives a respin to which the modification applies:

Divine Showdowns Free spins feature can be activated by landing three Scatter symbols. The player may select one of the four Gods where the corresponding modification will be the entire feature active. The player gets three lives that are kept at the top left. Every round you will see a Battle Reel with four symbols: the other three Gods and a free spin symbol. As soon as the Battle Reel stops on the free spin symbol you will receive a free spin and the winnings made with it will be paid out. As soon as the Battle Reel stops on a God symbol, the battle between your selected God and the other God is started.

The battle between the Gods consists of three rounds with three “Power symbols” landing each round. The God with the most Power symbols wins the round. The God who won the most rounds wins the battle and the corresponding modification of the winning God is applied to the spin that takes place after the battle. When you lose the battle, you lose a life. The Free spins feature ends as soon as you run out of lives. Symbols and symbol value of the Divine Showdown slot.

In addition to the Scatter and Wild symbol, the Divine Showdown slot machine has nine regular symbols, five of which are low symbols represented by the card symbols A, K, Q, J and 10. The four premium symbols are represented by the Gods Wukong, Anubis, Athena and Thor. You can view the values below.

Play’n GO is making a lot of progress. Where the software provider made exact copies of slots from, for example, NetEnt a few months ago, Divine Showdown is a unique creation with a lot of action and interaction. We are happy to see that Play’n GO uses its own creativity again. This video slot may sound complicated, but in practice this is not so bad. We recommend that you first play the game for free. We give 4.2 out of 5 stars.

If you want to play Divine Showdown or another game of Play’n GO you can go to one of our Play’n GO Casinos below. Our preference to play games from this software provider goes to Justspin Casino, Billion Casino, Kassu Casino, Webbyslot, No Account Casino, Wildz Casino, Nomini Casino, All Right Casino or Casumo Casino. If you prefer to play somewhere else, you can view our top 10 below.