Take the pirates out to sea and hunt for treasures in Quickspin’s Skulls UP! slot. You will have the opportunity to join the pirates, parrots and spedor monkeys. Quickspin’s first video slot of 2020 promises to be one full of action. From January 14, 2020, this slot can be played at our accredited Quickspin Casinos. Are you ready to go sailing and looking for wealth? Then hunt the hidden treasures among the palm trees with the pirates.

How does the Skulls UP! slot machine work?

The game starts with five reels, three rows and 243 ways to win and can expand to five reels, six rows and 1944 ways to win. A winning combination is from three identical symbols from left to right on adjacent reels. Skulls UP! can be played on any device from £/$/€0.10 to a maximum of £/$/€100 per spin and has an RTP of 96.26%. The game also comes with various features. There is a Flaming Skull Wild symbol with which the Flaming Respin feature can be activated. The playing field can also be expanded with this feature. We explain how it works exactly below. We will also explain the Flaming Free Spins in more detail. 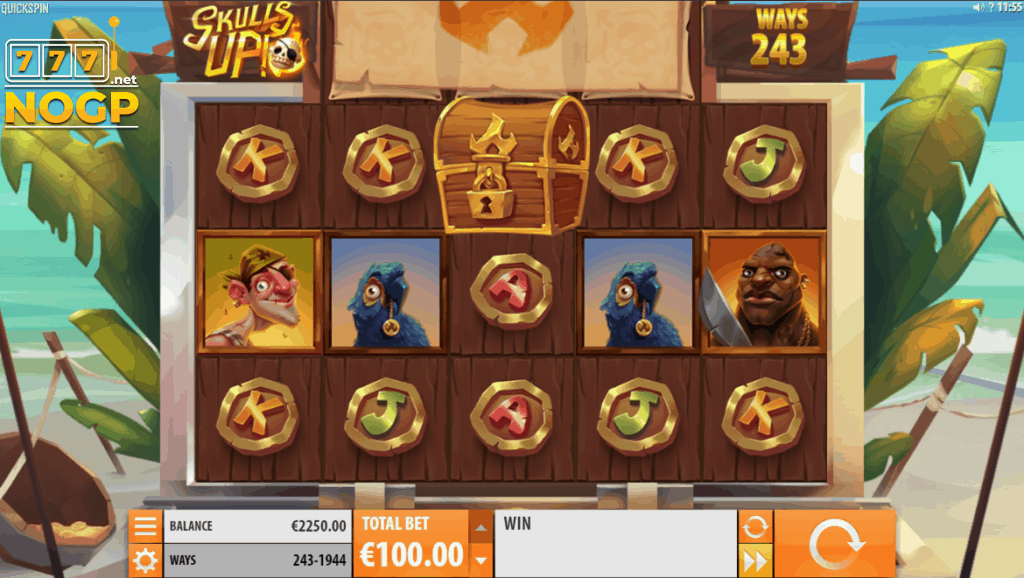 A screenshot of the basic game of Quickspins Skulls UP! slot

When a Flaming Skull Wild symbol lands on the reels, the Flaming Respins feature is activated. Before the Respin starts, all Wild symbols will be launched to unlock a new position above the relevant reel. When there are no more positions to open, they will stay in place.

When there is a winning combination with a Flaming Skull Wild, the fire will go out and it will turn into a Skull Wild. The Respins will continue as long as there are Flaming Skull Wild symbols in play. With the Flaming Respins feature, the playing field can expand to five reels, six rows and 1944 ways to win.

Skulls UP!’s Flaming Free Spins feature can be activated by landing three Scatter symbols. If successful, the player will receive 8 free spins. The Flaming Respins feature is also active during the feature. The difference with the basic game is that the playing field is not reset to the standard size here. When the playing field expands, it will stay that way for the entire feature. When a reel extends to a maximum height of six symbols, the player receives one extra free spin. In total, the player can therefore receive 14 free spins. 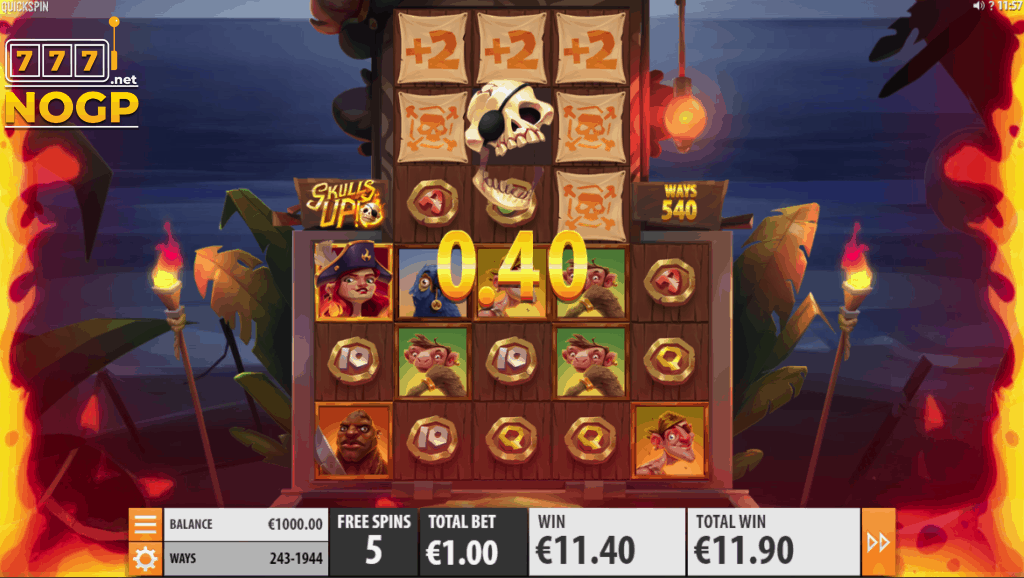 A screenshot with the Flaming Free spins feature activated.

Symbols and symbol value of the Skulls UP! video slot.

Skulls UP! has ten regular symbols including five high represented by crew of the pirate ship: Captain No-Beard, Biggie, Smelly, Wrench and Parrot Biscuit. The five low symbols are represented by coins with an A, K, Q, J and 10. The values of the symbols can be seen in the table below.

Our Skulls UP! slot review.

The pirate theme is very popular in the iGaming Industry. Red Tiger recently released the Pirates Plenty slot: a video slot that cannot be beat. Skulls UP also has a pirate theme and the video slot looks great. The features provide enough action so that you can play for a long time without getting bored. You can win up to 3650 times your bet. The game is of high volality and is suitable for small and large players. Skulls UP! gets 4 out of 5 stars.

Play the Skulls UP! slot machine.

If you want to play Skulls UP or one of the other Quickspin slots, we recommend that you do so at licensed online casinos. To help you make the best choice, we have placed our top 10 below. You can go to top casinos such as Justspin Casino, Sugar Casino, Kassu Casino, No Account Casino, Simple Casino, Mr. Play, Casino Winner or Loyal Casino. If you prefer to gamble somewhere else, you can view the list below.