After the mega success of Monopoly Live: Dream Catcher Edition, Evolution Gaming – the most popular software provider for live casino games – has already launched a new game: Deal or No Deal Live. Officially, Deal or No Deal is a TV game program produced by Endemol and is derived from the Dutch TV program ‘Postcodeloterij Miljoenenjacht’. The TV program Deal or No Deal is very popular in the United Kingdom and America. The Deal or No Deal Live Casino game was developed in collaboration with Endemol Shine and is based on this popular TV show. From May 2019, the game can be played at almost every online casino with Evolution Gaming software – a top 10 can be found at the bottom of this article. We will also explain everything about this live casino game. 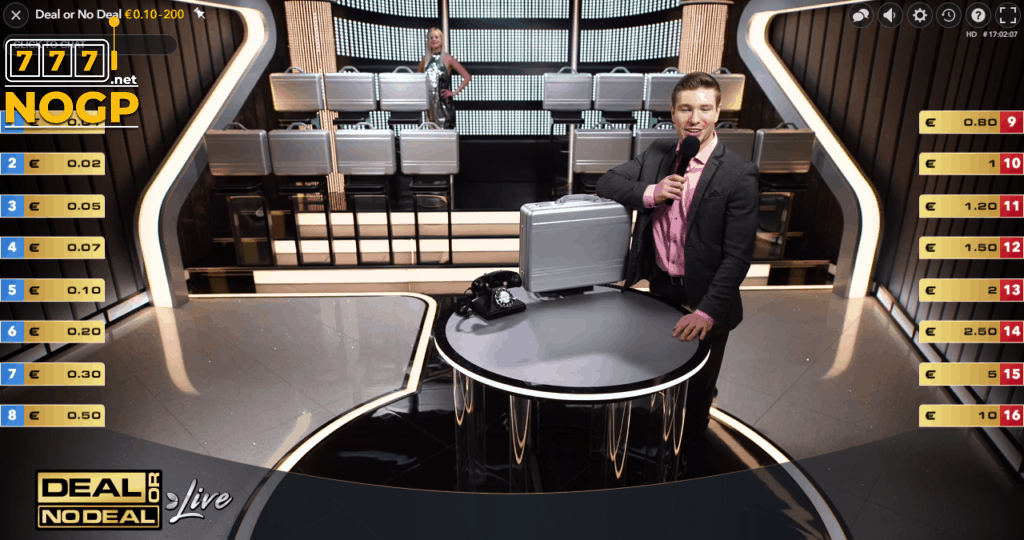 How does Deal or No Deal Live work?

First of all, the live casino game has three different rounds: the qualifying round, top-up round and the popular suitcase game. Depending on the online casino where you will be playing, Deal or no Deal can be played live from £/$/€ 0.10 to a maximum of £/$/€ 200. You can win millions in the TV program. This is unfortunately not the case with the live casino game. You can win up to 500 times the bet here. The game can be played 24 hours a day, seven days a week and has a payout percentage of 95.42%. It may also happen that you have to wait a while when you pass the qualifying round. The suitcase game is played 30 times per hour. You will not be bored while waiting. Evolution Gaming has developed the top-up round for this, which you can simply skip by doing nothing. You can read all about the different rounds of Deal or no Deal Live below.

When you have made your choice, you can turn to the bank vault that you see. This vault consists of three layers and at the top you see a quadrant with the word “LOCKED”. The idea is to turn the safe and get three golden layers in it. If this succeeds you are qualified for the suitcase game. If not: you can just watch and wait for the next round. 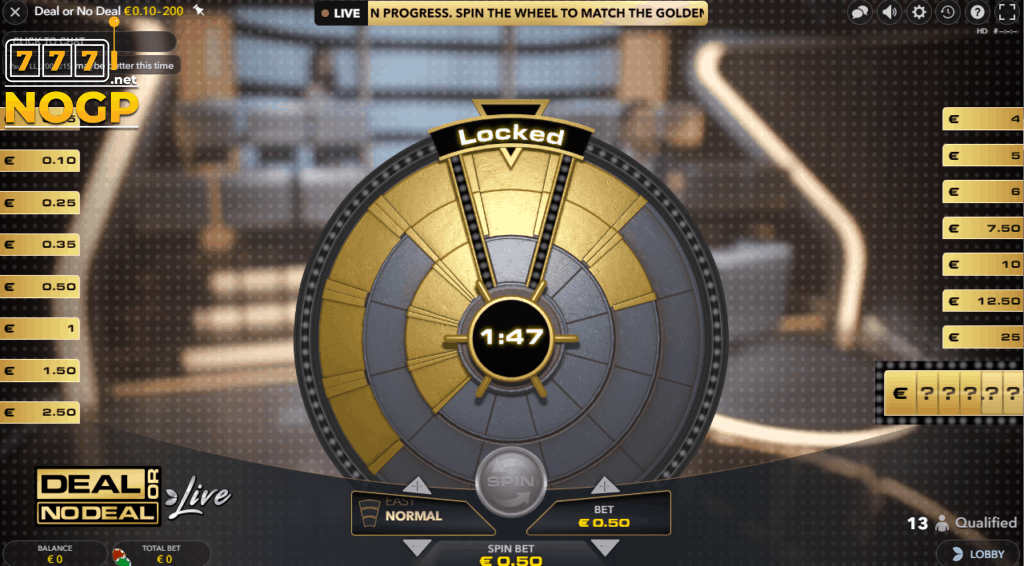 The bank vault to get through the qualification round. The top quadrant must be completely gold.

The qualifying round takes two minutes. If you are qualified within this time you will see the Top Up round. You will see a Wheel of Fortune with which you can get extra value in the suitcases. For this you must first click on the number of the suitcase that you want to fill. Each turn will increase the value of the suitcase by the value at which the Wheel of Fortune stops. Again: it is not mandatory and you have to bet extra for this. You can simply skip this step if you do not want to spend extra money. 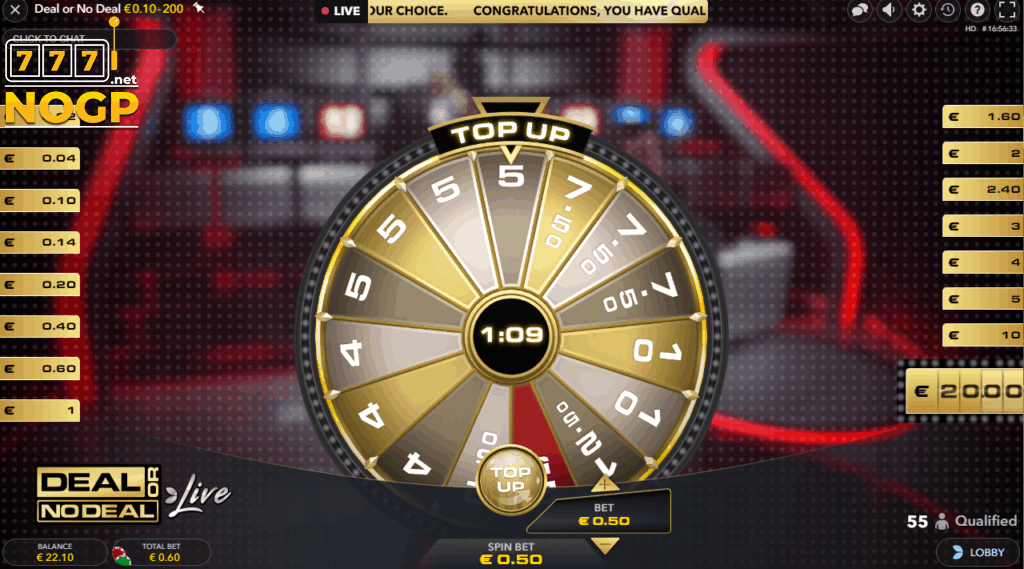 The Top Up round of Deal or No Deal live. Here you see a Fortune wheel with different value that you can use to increase the value of the selected suitcase. (This round is not mandatory)

Just like the real game, there are 16 suitcases with different values. Next to the presenter is the case with which you will play the game. This case can hold a minimum of € 0.01 and a maximum of 500 times the stake. The Deal or no Deal Live suitcase game is played in four rounds. After each round you will receive a bid from the bank whereby you must indicate within 10 seconds whether you have a Deal or not. If you have not clicked within this 10 second period, a No Deal is automatically assumed and the following round is started:

After the fourth round there are two suitcases left. Your own suitcase and one other suitcase. You now have the choice to keep your own suitcase or change the suitcases. After this your suitcase will be opened and you will receive your prize. 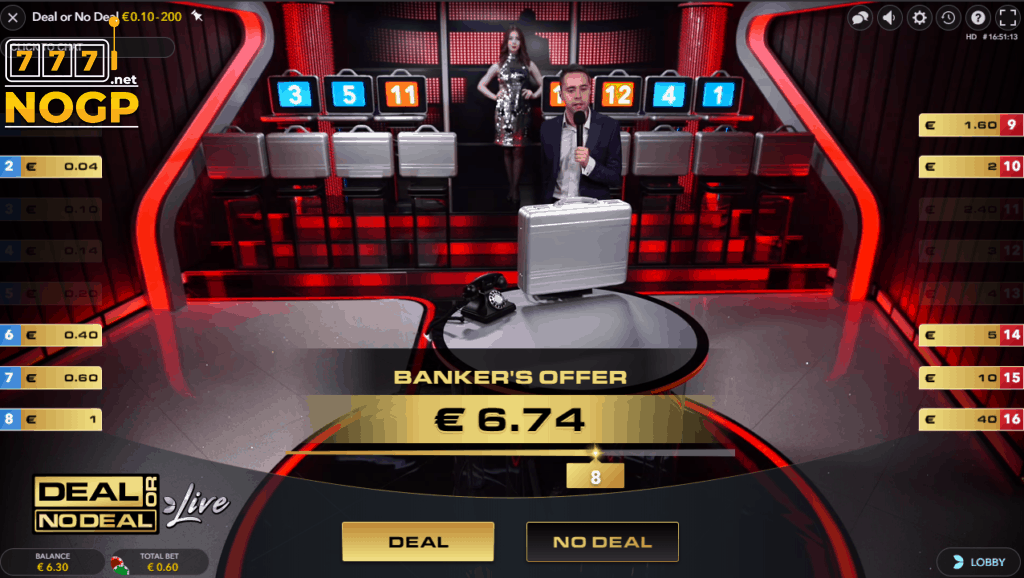 On the screenshot you can see the bank’s offer. It is up to you whether you have a Deal or not.

Is Deal or no Deal Live fair and reliable?

The Deal or No Deal Live game was developed by Evolution Gaming – the top software provider of live casino games in the iGaming Industry. This certified and licensed company has purchased rights from Endemol (the producer of the TV program) to develop the game. Because it is a live casino game, real people come in (a host and hostess). This often arouses mistrust because it is assumed by default that the suitcases are also provided with their value by these people. This will mean that the entire Deal or no Deal Live game can be influenced. However, as we have written before, Evolution Gaming is a licensed and certified software provider. This means that they are obliged to have everything determined by a Random Number Generator. This means that the results cannot be influenced in any way.

Our Deal or No Deal Live rating.

The online casinos with Evolution Gaming software can again be a great casino game richer. In fact, without Evolution Gaming, online casinos might not have been as fun as they are now. The Deal or No Deal Live game is based on the TV program of the same name, which is especially popular in the United Kingdom and America. It is difficult to give a rating because we thought Monopoly Live was great but this game is also perfect. It is for once something different than a new variant of Roulette or Blackjack. We give 4.7 out of 5 stars because we are convinced that Evolution Gaming will once again surpass itself at the next live casino game release

Play Deal or No Deal live

If you want to play the Deal or No Deal live game, this is possible at many, but by no means all, online casinos. That is why we have made a list of Deal or No Deal Live Casinos especially for you. Below you will therefore find our top 10 best Evolution Gaming Casinos where you can play this beautiful live casino game. You can go to LeoVegas Casino, Casumo Casino, Casino Winner, Playzee Casino, Rizk Casino & Guts Casino, among others. If you prefer to gamble somewhere else, you can view the list below.

I would have loved to give a good rate but the qualification process is pathetic am sure that is were deal or deal steal money from clients. It is frustrating that it takes 6 to7 spins for to open on easy mode or normal.