The Wilhelm Tell video slot from Yggdrasil can be played from 10 April 2019. So some information may be missing in this article.

After the Cazino Cosmos slot, Champions of Rome slot, Dr Fortuno slot and the Dwarf Mine slot, it’s time to review Yggdrasil’s fourth release of 2019. This time the video slot has been named Wilhelm Tell and is based on the Swiss Robin Hood: Wilhelm Tell. Historians doubt whether this Swiss archer really existed, but the legend goes that Tell shot an apple from his son’s head. The story about Wilhelm Tell has been filmed several times and now Yggdrasil comes with an online video slot about the Swiss folk hero. In this article we tell you everything about the Wilhem Tell video slot from Yggdrasil. The Wilhelm Tell slot can be played at every Yggdrasil Casino from 10 April 2019. If you don’t feel like reading our slot review, you can scroll directly to view our top accredited Yggdrasil Casinos.

How does the Wilhelm Tell slot work?

The game is played on a five-reel, three-row, and 20-payline playing field. There is also a Wild symbol that is three symbols high. The Wild symbol is the son of Wilhelm Tell, tied to a tree with an apple on his head. If the Wild symbol is not completely on the reels and a winning combination can be created, the Wild Nudge feature is activated. The Wild symbol will then be nudged up or down, making the Wild symbol fully on the reels. In addition, there is also a free spins feature where the player can choose between the number of free spins and the height of the multiplier. We will tell you more about this later. This Yggdrasil slot can be played on any device from £/$/€ 0.10 to a maximum of £/$/€ 50 per spin with a payout percentage of 97%. 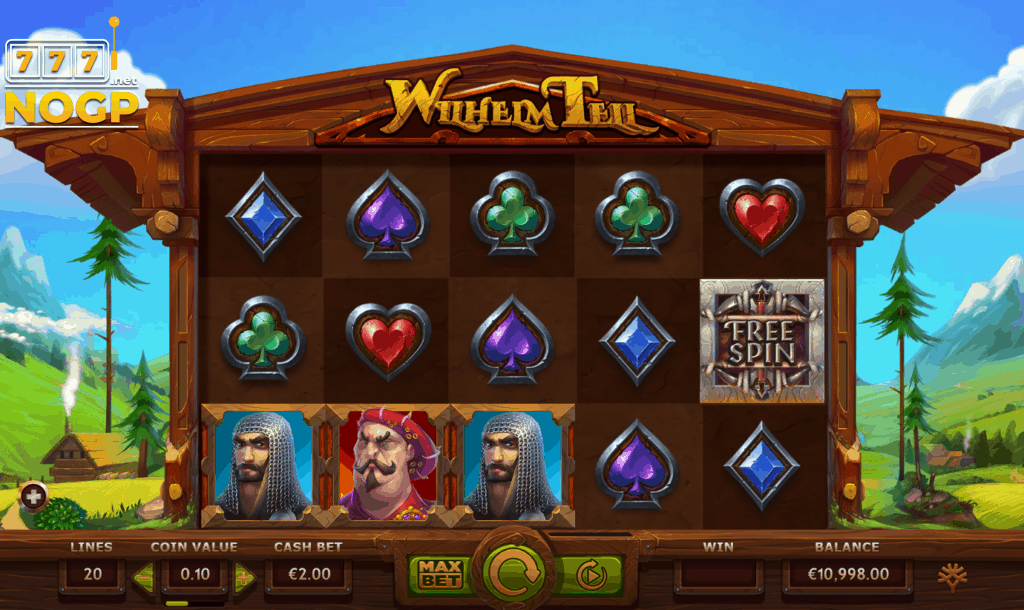 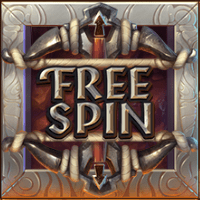 The scatter symbol of the Wilhelm Tell slot machine

The free spins feature can be activated by landing three or more Scatter symbols. When the player lands all five Scatter symbols, he or she is rewarded with 500 times the bet. In addition, the player receives the following choices:

During the free spinning session it is not possible to win extra free spins. 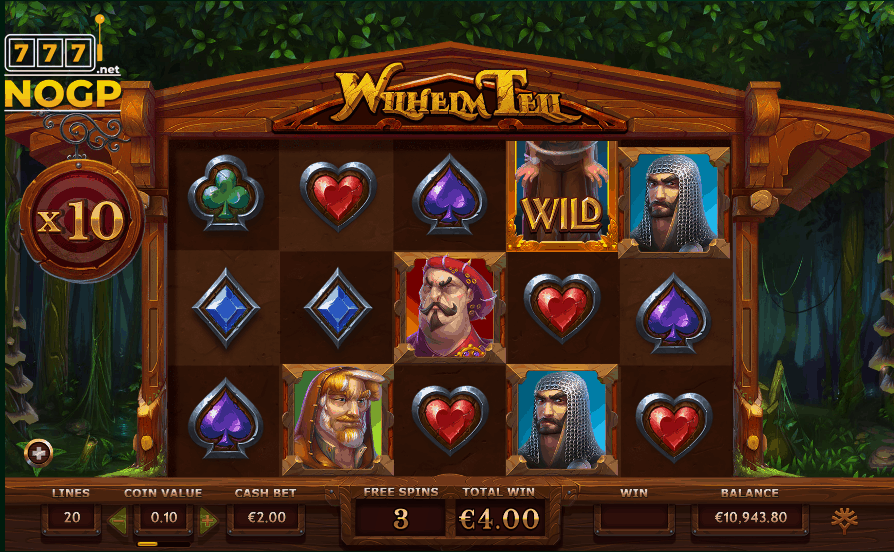 A screenshot where Wilhelm Tell’s free spins feature is activated

Symbols and symbol value of the Wilhelm Tell slot machine.

In addition to the Wild and Scatter symbol, the Wilhelm Tell slot machine has seven regular symbols, including four low card symbols: hearts, clubs, spades, diamonds and the three characters: Wilhelm Tell, governor Hermann Gessler and a knight. The values of the symbols and how they look can be seen in the table below. The values are displayed in coins and can be multiplied by the coin value with which you are going to play.

The basic game of this Yggdrasil slot is rather boring and we think that a slot with this theme could be much more exciting. For larger winnings, the free spin feature must be activated. We have chosen here for the 5 free spins with a multiplier of 5. For people who like to gamble there is also the choice to choose one free spin with a multiplier of 50 ×. With this you can win up to 7500 × the stake but that chance is very small. Yggdrasil could have made a better ending with Wilhelm Tell as the theme. That is why this slot gets 3 out of 5 stars.

The Wilhelm Tell slot can be played at any Yggdrasil Casino and therefore you will find our accredited online casinos with Yggdrasil software below. Of course we also have a preference that we would like to share with you. For example, we recommend Untold Casino, Rizk Casino, Casumo Casino or LeoVegas casino. If you prefer to gamble somewhere else, you can view our top Yggdrasil Casinos below.